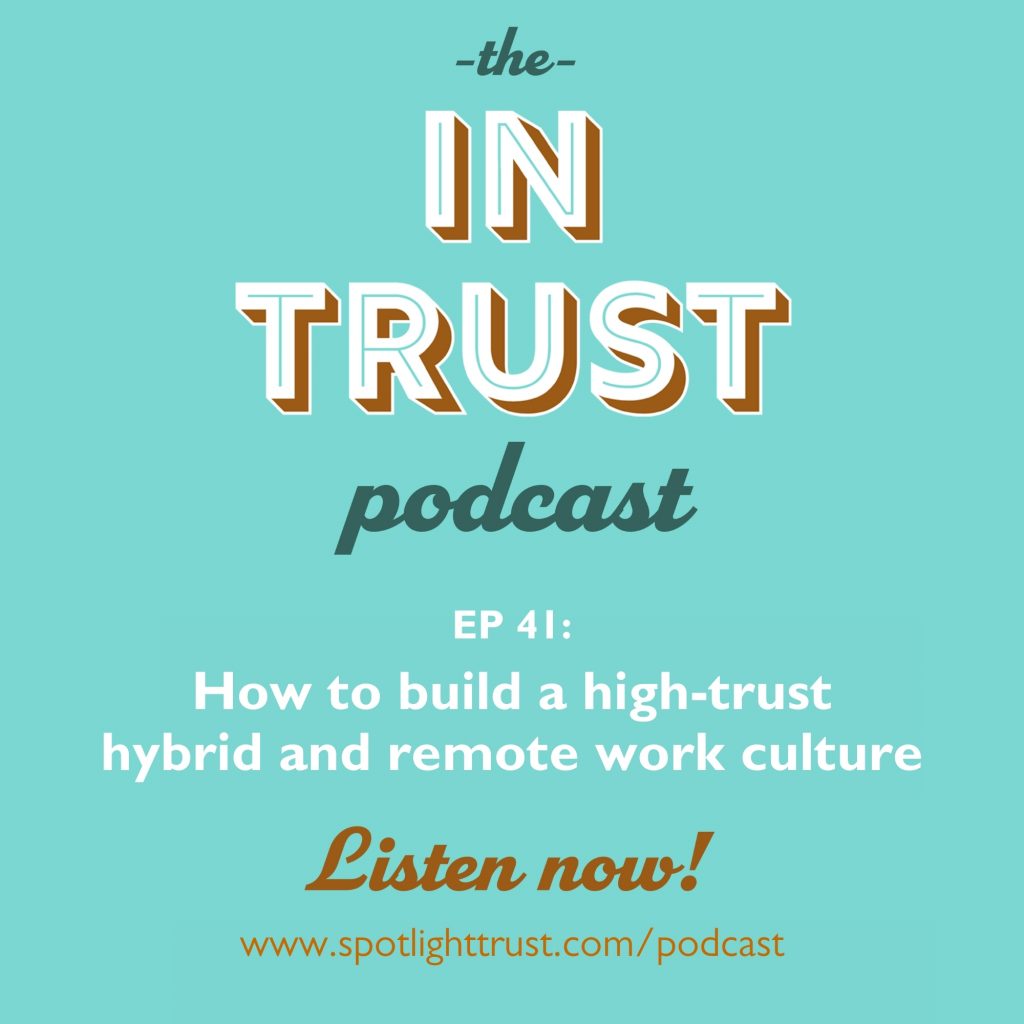 As organizations roll out their post-pandemic work plans, where are many getting tripped up? What must leaders and organizations consider in order to build a high-trust hybrid and remote work culture?

Organizations around the world are rolling out their plans for the post-pandemic workplace, many of which involve hybrid or remote approaches. And many are facing pushback from their employees who feel like these plans miss the mark.

In this episode of the In Trust podcast, we get into some of the false assumptions leaders are making when it comes to the post-pandemic workplace and how these are eroding trust within their organizations. We also share 6 practical insights to help leaders and organizations leverage this rare opportunity to transform their workplaces for the better by building high-trust hybrid or remote work culture.

If you’re contemplating what the post-pandemic workplace might look like, you won’t want to miss this episode of In Trust.

Overview of Episode 41: How to build a high-trust hybrid and remote work culture

“Something that’s really frustrating me is seeing workplaces that are now “calling their people back” to work when they were never gone in the first place. They just weren’t in the office anymore. This assumption that we weren’t doing real work during this time is super frustrating, and especially for workers who have been working really hard and found ways that worked really well for them.” – Lisa Lambert

“Feedback seems to be something that leaders like to give, but don’t like to necessarily get. You really need to create a culture where communication is going both ways.” – Rick Kitagawa

“Leaders really need to work to model accepting feedback graciously and making sure that they’re acknowledging the feedback that does come in, even if they can’t ask act on it.” – Rick Kitagawa

“Feedback is really a skill and now’s a great time for organizations to invest in their people and organization by investing in developing that skill.” – Lisa Lambert

“When we’re designing for trust and inclusion, the language that we use to telegraph our design choices and how we’re presenting them is super important. For example, something we’re seeing coming from a lot of organizations is they’re giving ‘permission’ for their people to work from home a couple days a week. Giving permission is very different from actively encouraging a design choice. When it’s permission, people feel like they’re taking advantage of a favor and they have to pay for that with social capital and trust. Whatever your organization decides to experiment with as part of your intentional design choices, don’t give permission to your workforce to do it – you need to actively promote it. If you’re not actively promoting that choice, you’re risking that choice or that option feeling like a concession and something that erodes trust if people do choose to go with the permissible option.” – Lisa Lambert

“What I’m excited about with this hybrid world is it creates new possibilities and is ultimately offering some new design blocks and new ways of thinking about and experimenting with what work might look like.” – Lisa Lambert

“As you’re making those organizational design choices, it’s super important to think about everyone, not just those with the most status, power, authority, privilege, which happens a lot of times. Have empathy for every person within your organization and figure out what works best and what works better for them.” – Lisa Lambert

“Thinking about everybody and designing for people who are not you is such a key point.” – Rick Kitagawa

“Be intentional about connecting as people, because at the end of the day, work is relational, not transactional.” – Rick Kitagawa

“Companies don’t have the power they used to have to just brute force things anymore. It’s all about enrolling people and building trust. It’s about building those relationships with your workforce in order to move forward together and thrive.” – Rick Kitagawa

“As we’re working more and more with technology, we need to be super mindful to put people at the heart of work. We need to ensure we are putting people first and that the technology is serving the people, not the other way around. That comes down to building meaningful connections and trust with one another.” – Lisa Lambert

“Community agreements are so incredibly powerful because they give people the shared language to be able to keep themselves accountable and keep others accountable.” – Rick Kitagawa

“Leading with trust is always going to outpace command and control and surveillance.” – Rick Kitagawa

“If you don’t trust your people, and you need to install keyboard tracking and mouse movement per minute type things, you have to ask yourself, ‘Why do you not trust your own team?’ You really need to get to the root of your trust issue so that you can address it head on and co-create the conditions to really unleash your team’s potential as a whole.” – Rick Kitagawa

“I guarantee you there are ways to build this trust because, at the end of the day, trust comes down to skills. It’s investing in developing yourself, your people, and your organization with these Trust-Centered skills.” – Rick Kitagawa

“It’s cheaper to invest in what’s required to resolve those trust issues, and to invest in your people and in building the skills, the systems, the organizational structures that build trust versus investing in surveillance technology and all the consequences and the trust issues that brings into an organization.” – Lisa Lambert

There’s a lot of uncertainty about the future, but one thing we are sure about is that The Future Is Trust. Which also happens to be the title of our new book.

The Future is Trust: Embracing the Era of Trust-Centered Leadership is available now!

Go to thefutureistrust.com to order your copy.