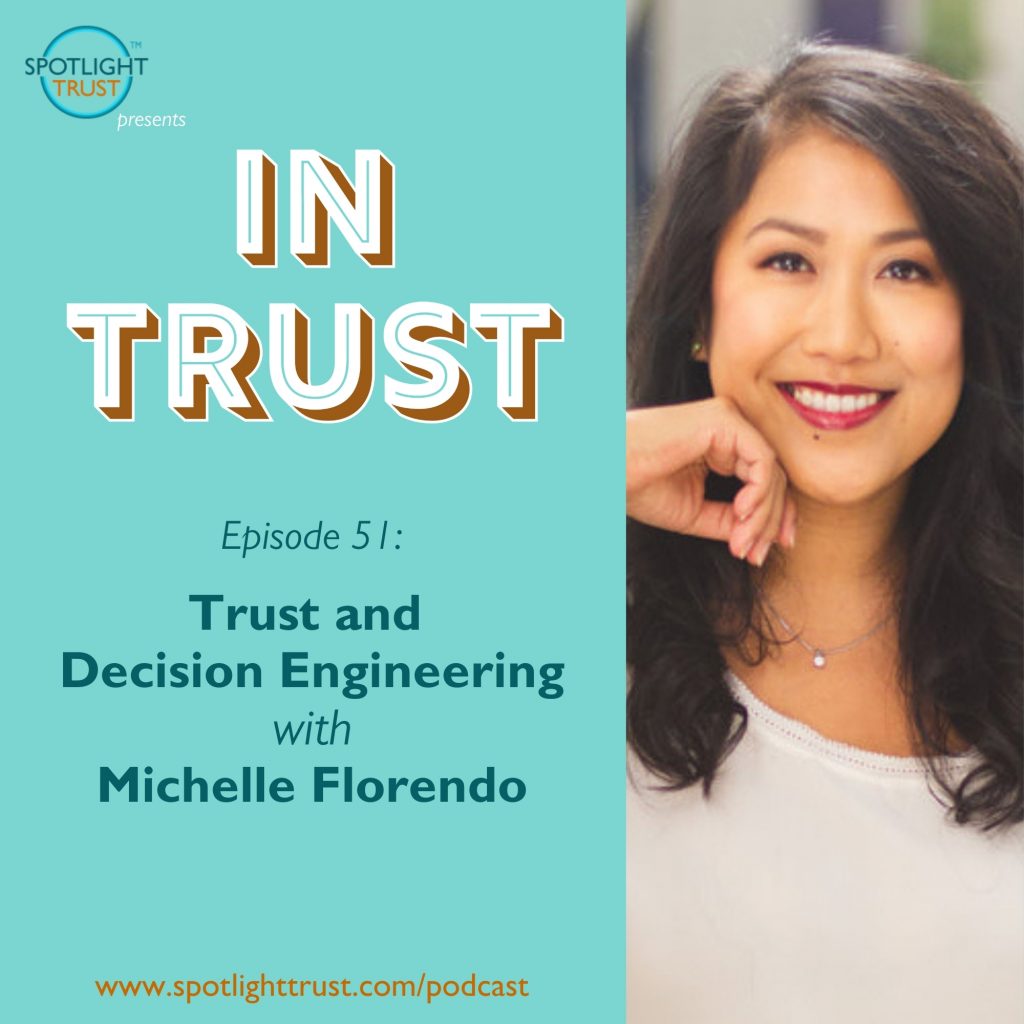 How do you untangle big, messy decisions?

How do you make collective decisions within organizations that everyone can get behind, even if they disagree?

Who better to ask these questions to then Michelle Florendo, a decision engineer and award-winning coach for type-A professionals (who also happens to host a podcast called Ask a Decision Engineer). Michelle uses a blend of decision engineering, design thinking, and lean startup principles to help her clients achieve their goals. Michelle has guest-taught on career decision making in Stanford’s famous Design Your Life course, was a founding member of the Forbes Coaches Council, coaches for Startup Parent, and teaches a course on decision making for Stanford Continuing Studies.

In our conversation we talked about the relationship between trust and decision making, why decision making is less like shooting an arrow and more like steering a ship, and what defines a quality decision.

If you’re looking to make better quality decisions as a leader and with your organization, then you won’t want to miss this episode of In Trust.

Overview of Episode 51: Trust and Decision Engineering with Michelle Florendo

“We just call it feeling feelings because sometimes we can’t name the feeling.” – Michelle Florendo

“I don’t have any sort of value judgment on people who take a lot of time to think through decisions versus people who are more comfortable making a decision on the fly. I think they’re just different styles due to however we may have been socialized or just what our internal comfort is.” – Michelle Florendo

“If people within organizations are better equipped with the language [of decision-making] and of having that dialogue, it can foster more empathy, more trust, more discussion, and convergence on what might be the right course of action. And even when there is disagreement, at least if there were dialogues that were had at that granular level, at least it can be okay. ‘We disagree, but we understand why.’” – Michelle Florendo

“What gets people stuck is that a lot of people feel like, ‘oh, I can’t make a decision or I can’t move forward until I know it’s going to be the right decision.’ That type of mindset is one where they’re treating decision making like shooting an arrow. ‘I need to get it to hit the bullseye, because if it doesn’t, it’s been a total miss.’ But the thing is, decision making is less like shooting an arrow and more like steering a ship. ‘I’m gonna make a decision. I gotta go this way, and then I get hit by a wave. Well, okay nevermind. I don’t want to go that way. I’m gonna make another decision. I could go this way.’ It’s never just one decision and we aim and we let go. Even if life were that way, it would be super boring.” – Michelle Florendo

There’s a lot of uncertainty about the future, but one thing we are sure about is that The Future Is Trust. Which also happens to be the title of our Amazon bestselling book: The Future is Trust: Embracing the Era of Trust-Centered Leadership.

This reimagination of what a leadership book can be sheds light on:

Visit out thefutureistrust.com to order your copy and access special bonuses.