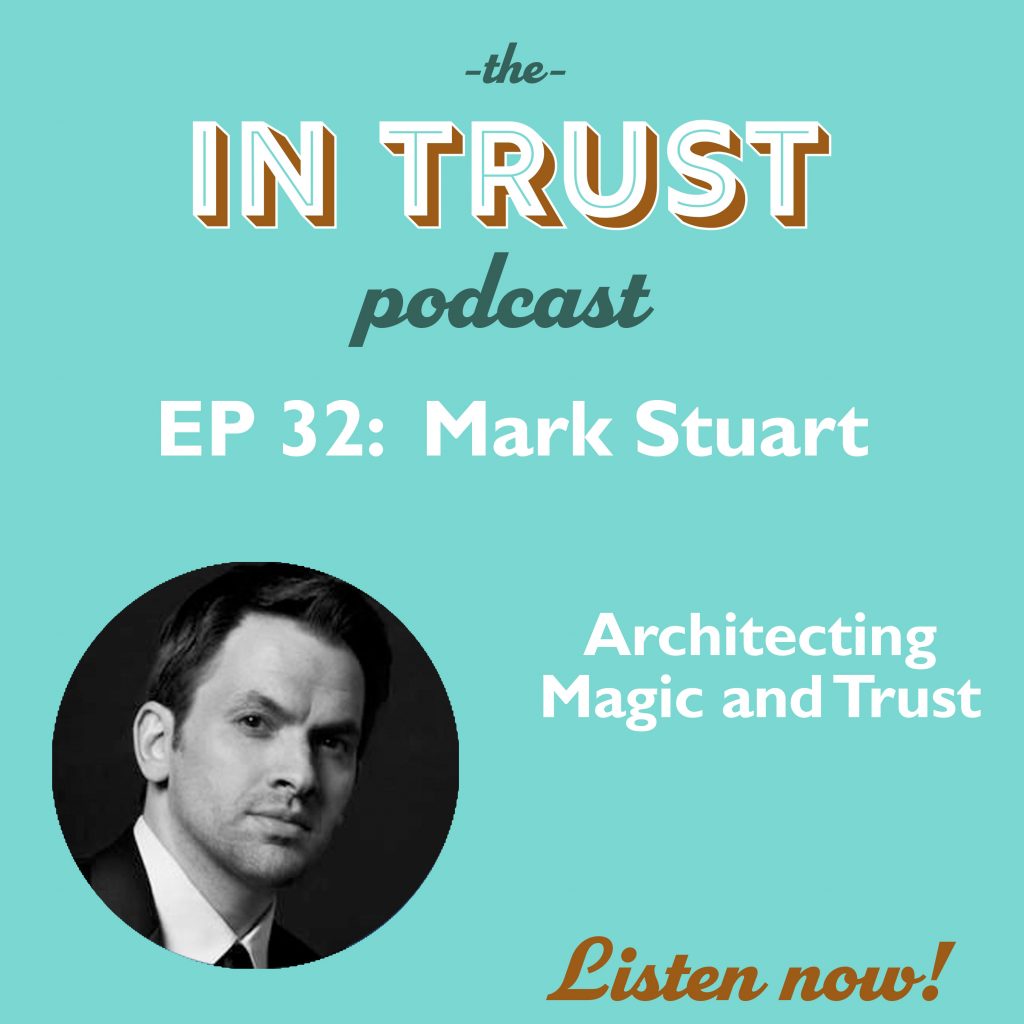 What’s the connection between leadership, trust, and magic? What happens when we, as leaders, create more space for magic?

Who better to discuss these questions with than the Architect of Magic himself, Mark Stuart? So that’s just what we did!

Mark is the Founder and Executive Artistic Director of Mark Stuart Dance Theatre. Mark’s award-winning choreography and performances have been featured on Broadway, in films, commercials, and in print. He served as the Associate Choreographer of BANDSTAND on Broadway (recognized with the TONY Award for Best Choreography) and he created, directed, and choreographed the award nominated Off-Broadway dance-musical STANDARD TIME: When Change Comes. Mark is a coach for Seth Godin’s altMBA and is a four-time Director of the World Musical Concert series at Tokyo’s world famous Theatre Orb.

We enjoyed a magical conversation with Mark where we talked about how trust is like the game of Jenga, how hard discussions are vulnerable discussions and how these build a resilient community, the one question that has helped Mark trust in himself and that gave him the freedom to think differently, and much more.

If you’re interested in leading in a way that creates opportunities where what previously was thought impossible becomes possible, then you’ll want to listen to this interview with Mark Stuart!

Overview of Episode 32: Architecting Magic and Trust with Mark Stuart

“I serve as an architect of magic. And what that means is—whether it’s on stage or on film, or in a boardroom or in life—I use vulnerability, generosity, trust and the power of being seen, to help create magical experiences, and create opportunities where what previously was thought impossible becomes possible.” – Mark Stuart

“I realized that when I transitioned from choreographing to directing, I saw that directing was about creating space. And creating space gives people an opportunity to step into something that they didn’t necessarily see before. And so what I do is I try to help people step into their own magic, and be what they always wanted to be or thought they could be or create a team that functions the way they thought it could function or create a show or an artistic experience. That seems like a grand wish and not a reality. But with magic, anything’s possible. So that’s sort of what I do.” – Mark Stuart

“That’s how I learned to dance – just by going and doing it and being bad at it.” – Mark Stuart

“I think the reason I progressed so quickly is that I wasn’t afraid to not fit into what it was supposed to be.” – Mark Stuart

“If you’re learning a six count pattern, it’s supposed to be two triple steps, or whatever, and a rock step. I wasn’t afraid to take out all the footwork or make something completely different, and still fit it in that framework. I was really bad at it at first. But then,  all of those failures helped me learn much quicker, what worked and what didn’t work.” – Mark Stuart

“What I was doing was very different than what most people did at that point. I think that stood out.” – Mark Stuart

“When I was teaching swing, and even what I teach now, in general partnering in the Broadway community, I teach with your eyes closed because what you’re looking at is not necessarily what’s happening. Our eyes often deceive us. So, for me, partnering is really about being present and blocking out the noise so that you can really listen and understand what this other human is telling you. That has really become the basis of how I do everything. And by that, magic has evolved into a process of closing our eyes, being present, grounding ourselves and then creating a space where we can see and hear each other without words first.” – Mark Stuart

“Whether I’m directing, or facilitating a team in a boardroom, or coaching a client on the business they’re running, we start by just taking deep breaths to ground ourselves and be present. Then we just stare at each other in silence, and just see that there’s a human in front of me. ‘What do I see? What do I hear?’ And then, start with a really vulnerable question, something as simple as, ‘How is your heart today?’ or ‘What are you feeling in this moment?’ Something as simple as that can create the feeling of being seen and heard in humans in a world where we often don’t experience that.” – Mark Stuart

“We don’t care about an army of people doing something; we care about humans telling stories. And so what if humans told their own stories within the larger story of the show or the scene that we’re producing?” – Mark Stuart

“Anything worthwhile comes with the risk of being potentially horrible.” – Mark Stuart

“I realized that magic is magic everywhere, because humans are human. We all are struggling. We’re all broken. We all need to feel seen and heard, and we rarely do, wherever that is, whatever we do. So if we can create space for that, and we can see the humans in front of us as the basis for everything that we do, then it’s a game changer. Like that’s the ballgame. Everything becomes possible.” – Mark Stuart

“There’s so much darkness in our world, there’s so much hate, there’s so much prejudice, so much fear. What if, instead of leading with that, we lead with these little flashes of love and gratitude and hope and feeling seen? And even if that’s only five seconds a day, I think that can change the world. And that’s why I’ve always been in love with the arts, and now with magic, because all it takes is five seconds.” – Mark Stuart

“I think magic essentially comes down to trust it. It creates an opportunity to trust people that you wouldn’t necessarily have.” – Mark Stuart

“Trust is really about embracing the fact that this is not going to be perfect. Something’s going to go wrong, but I trust that we’re still going to figure it out and find safety in it.” – Mark Stuart

“Even though things can get messy, when we start out just seeing each other and feeling seen, in those moments you trust that the people in front of you will hold you up, because they’re going through something just like you are. So even if we touch on something that is traumatic and messy, at the end of the day we always know that when I come back to look you in the eyes, you’re still that same person, and I’m still that same person, and we have each other’s backs.” – Mark Stuart

“Without those few moments of coming together and just being, I find that it’s really hard to maintain that trust, because we as humans tend to walk in with our walls up not trusting anybody and then trusting people even less when they walk away. A lot of that is about the stories we tell ourselves about ourselves and about others. And those stories can just magnify themselves. But when you spend five seconds looking in someone’s eyes and really seeing them, you start to hear their story, and you start to empathize with them. And that’s something that I haven’t found a way to replicate: that trust. It’s a trust starter.” – Mark Stuart

“Hard discussions are vulnerable discussions that most of us are uncomfortable having.” – Mark Stuart

“I think that building trust is like playing Jenga. When you play Jenga, as the tower gets higher, it gets shakier, which is really exciting and also terrifying. You can only build it right by taking a piece from the bottom that’s holding it up and bring it up top. I feel like that’s what trust is because the more you trust the deeper you go, or the higher you go, and the more opportunities that creates for it to topple over. However, the moments of silence, the moments of seeing are like the Jenga building blocks that keep going up. When buildings get wobbly, they never fall down in Tokyo, for example. They’re designed to withstand high winds and they’re designed to wobble. I feel like silence and eye contact are the building blocks of those wobbly buildings, because every time it starts to wobble if you look in someone’s eyes and don’t talk and just see them, you start to come back to the foundation of who we are.” – Mark Stuart

“If I’m afraid if it’s going to work, that means it’s probably the right thing to do. If I’m not afraid of it, if it’s easy, then it’s probably not for me. That’s not what I do.” – Mark Stuart

“No one should ever get to tell you what you can and cannot do in terms of following your dreams.” – Mark Stuart

“There will always be naysayers, but if we lead with the questions of, ‘What if it is possible?’ and ‘What if I can do it?’ and we keep coming back to those, I think dreams become attainable. That doesn’t mean they look like what we thought they were going to look like. I don’t think they ever do, and that’s not a bad thing. But I think the question of, ‘What if?’ keeps us moving in the direction and being open to redefining what dreams can look like, which I think is very similar to the artistic process.” – Mark Stuart

“When we breathe, be here now, and see the humans in front of us, we start to think about ourselves differently, because we’re seeing ourselves in other people. I think that can make the journey much easier.” – Mark Stuart