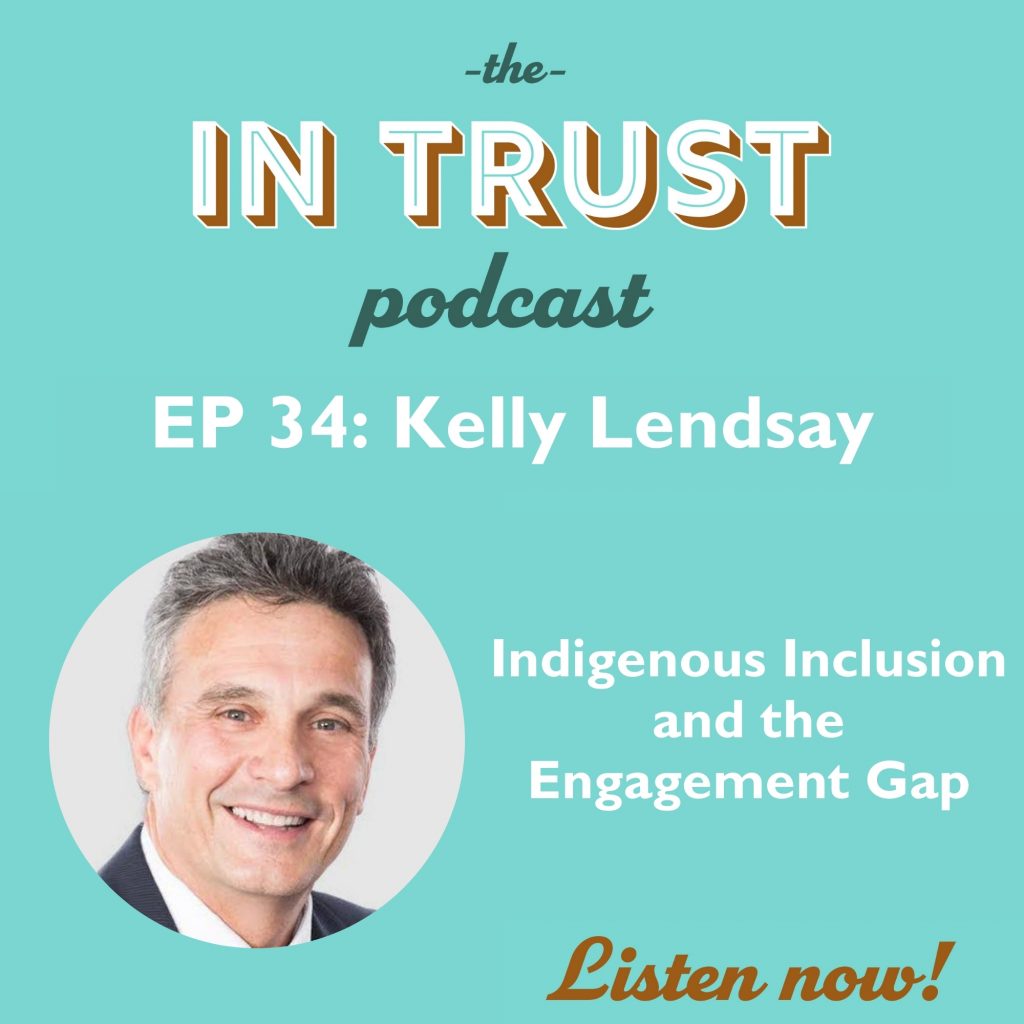 What’s the relationship between inclusion, engagement, innovation, and trust? How can increasing Indigenous engagement in the economy create better opportunities and prosperity for all?

We had the pleasure of exploring questions like these and many more with Kelly Lendsay, President and CEO of Indigenous Works. Kelly is an entrepreneur who is internationally recognized as one of Canada’s foremost innovators and organizational development experts in workplace inclusion systems, models, and corporate/indigenous partnerships. Kelly is a proud Canadian Indigenous leader of Cree and Métis ancestry who moves seamlessly between both worlds fostering economic inclusion, well-being and prosperity in Canada and abroad.

Kelly shared stories and wisdom from his extensive experience in workplace inclusion, effective bridge-building, and cultivating trusted partnerships for workforce and economic development across Canada, USA, Australia and abroad.

You won’t want to miss this episode if you’re interested in a systems thinking lens to inclusion strategies and practical ways to earn trust, build social capital, and cultivate effective partnerships with Indigenous communities and beyond.

Overview of Episode 34: Indigenous Inclusion and the Engagement Gap with Kelly Lendsay

“The problem in Canada is what I call this engagement gap.” – Kelly Lendsay

“If you look at the Indigenous issue, look at the newspaper: it’s a trust issue. It’s a relationship issue. And that’s what The Truth and Reconciliation Commission is about: the word truth is in it. How are we facing the truth, which is an ugly truth? And then how are we reconciling? And reconciliation should not take on this negative connotation. Elders talk about reconciliation in the spirit of optimism, growth, and change. How do we reconcile together to create new ways of doing things, to respect Western and traditional ways of knowing? So like Sitting Bull said, ‘Let’s put our heads together to see what we can do for all of our children.’ That’s really inclusion at work.” – Kelly Lendsay

“Although I’ve been involved in employment and partnerships, we have done so much to change attitudes and build what we call social capital. And the underpinnings of social capital is trust.” – Kelly Lendsay

“Inclusion is uncovering some amazing things. There are Indigenous companies and communities that are generating jobs. I estimate as many as 40% of the jobs are for mainstream Canadians. They’re developing opportunities for all Canadians. This story is not being told. There are over 50,000 Indigenous businesses. Entrepreneurship is growing eight times faster in the Indigenous community and we have the fastest growing workforce in Canada: 1.5 million Indigenous people, and the workforce increased 40%.” – Kelly Lendsay

“Employers are still facing skill challenges and there’s only two new sources of talent: immigrants and Indigenous. If you don’t have an Indigenous strategy, you’re missing out on a great pipeline of opportunity.” – Kelly Lendsay

“We’ve got to take the murkiness and black holes out of this and make it make sense to people. They need to understand what Indigenous people want and what communities want. Many of them are the same things we want: good health care, good education, good housing, safe drinking water. Basics, basics, basics.” – Kelly Lendsay

“We’re really asking some questions around what do we mean by authentic partnerships? People will say, you’ve got to build trust. Well, how do you demonstrate that? How do you animate trust? What is it to not be trustworthy? If you can look at sort of the elements and competencies within these broad terms, like trust, what we’re seeing on the Indigenous side, in our discussions with Indigenous people, and mainstream companies, they’re saying things like, what is your level or your ability to be vulnerable? Vulnerability is very important. And willingness. Willingness is ‘are you willing to put in the effort? Will you show up? Will the CEO come to the community?’ Sort of like in chemistry, these are the molecules or the atoms of of the structure that you’ve got trust.” – Kelly Lendsay

“Real leaders say, ‘I’m going to show up. I’m going to go there and I’m going to give them my word that I am committed. I want to grow a new partnership, a new relationship.’” – Kelly Lendsay

“They got trust because they were vulnerable. They showed real willingness.” – Kelly Lendsay

“I think Indigenous people also need to be vulnerable. There’s a lot of anger and hurt from the residential schools, from a history of exclusion and racism. We all saw on television yesterday, the verdict [of the Derek Chauvin trial]. I thought of the family of George Floyd. Does that verdict erase injustices? Does that pave the way? No, but it is a start. These are human issues. Indigenous isn’t the only one, there are issues around the world, certainly to our neighbours in the south, and we have those same issues here. So I think that if we’re going to win, we will work with you to really delve more deeply and share with you these salient features of trust. Because if we can describe them like that, I go back to my systems approach in our inclusion continuum, you can actually train people. You can say, ‘if you want to be a very effective leader and you want to go into the Indigenous community, on a scale of one to 10, how vulnerable will you be? And if not, let’s work on that. Let’s get you ready so that you can be prepared to listen.’” – Kelly Lendsay

“Listening is so important, right? You’ve got lots to say, but you got to listen to what these communities have to say as well.” – Kelly Lendsay

“That knowledge gathering is so important. It prepares you. Honestly, we have seen leaders and managers go to Indigenous communities, and they haven’t done one ounce of homework. They don’t know the history of the community. They have no knowledge of the region. And they get asked questions, or they then are given a teaching about the community. It’s always perplexed me how people will do everything right on the international stage, but we don’t do it right in our own backyard. So that’s the biggest lesson I’ve given people is don’t do anything different, do the same things you would do if you were going to another country: get ready and get knowledgeable.” – Kelly Lendsay

“There’s more work to be done to create this social and economic inclusion. COVID has taught us we all need each other.” – Kelly Lendsay

“Granovetter described this thing called the strength of weak ties. He talked about the weak relationships that you have can actually be some of the strongest relationships you have, and they’re built on trust. You develop relationships across this country and the strength and the power of them is that they are weak. We know each other and we’re both sort of saying we need each other, we’re going to move together. That’s sort of what I think is amazing for Canadians is that once people are pulled towards a vision, and they can see themselves being able to co-create and co-develop and commit to it, you can make some tremendous change together” – Kelly Lendsay

“We can change and we can build these effective partnerships and relationships by building the institutions. That capacity is how you build civil societies. And that’s what Indigenous people want and are doing. We want to build these institutions and strategies that can be good for everybody, not just for the Indigenous people. We can be informing on bringing in these worldviews and ways of doing things and knowing, and that really is inclusion at work. It really is a humanitarian principle as far as I’m concerned that humanity is about inclusion and inclusion is about humanity.” – Kelly Lendsay