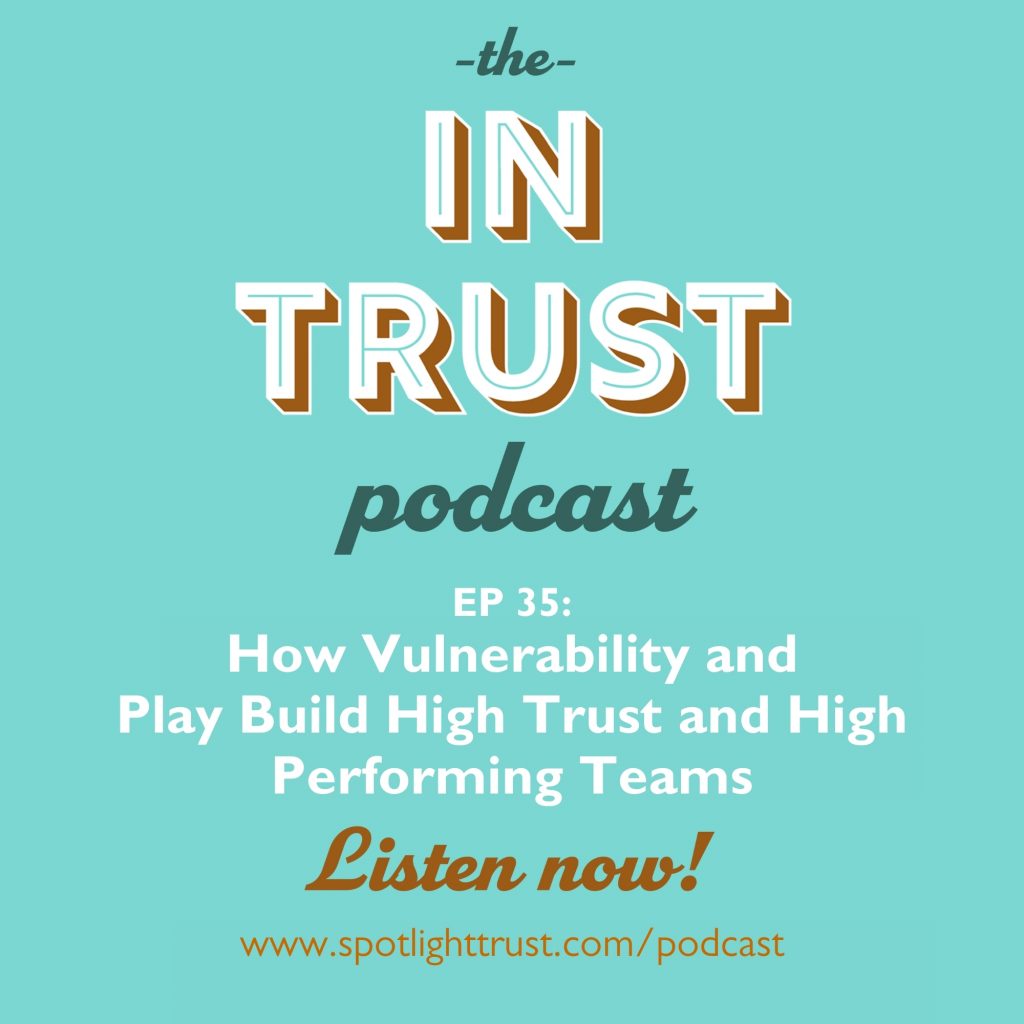 What is the relationship between vulnerability, play, and trust? What happens to team dynamics and performance when play is embraced as part of work instead of a bonus or afterthought?

It’s been a while since we’ve recorded a host conversation, so it’s just us – Spotlight Trust Co-CEOs Rick Kitagawa and Lisa Lambert – playing around this week. In this episode, we share insights into how norms are shifting when it comes to how people show up at work and what it means to be vulnerable and authentic as leaders. We also get into some of the ways we ourselves leverage vulnerability, levity, and play in our approach to working with clients on leadership development, team building, and organizational design.

If you’re interested in having more fun at work and getting more done while doing so, then you’ll want to give this episode a listen.

“I think vulnerability is in the moments where we show our real humanity.” – Lisa Lambert

“Vulnerability is when we take off the performative armor.” – Rick Kitagawa

“We create a story about ourselves where we have to show up to work in a certain way. And most of that is fitting into the culture versus the idea of showing up as our true selves and finding belonging.” – Rick Kitagawa

“Just actually showing up as a human being: I think that is almost a revolutionary act in itself.” – Rick Kitagawa

“Am I showing up in the right way? Am I dancing the right moves here? Am I saying the right things? That shift from conforming to enriching and looking at how each individual person with all they bring in their strengths, their weaknesses, and their humanity enriches and really weaves the fabric that is organizational culture. That’s the way forward. It’s a big thing for organizations to internalize. It’s also a big thing for a lot of us as individuals to internalize and understand because we’re trying this on for the first time and we’re seeing how it fits and we’re trying to kind of experiment with ourselves and choose how we want to show up. And in a time when, for so many of us, our work is such a big part of our identity, having the freedom to define that a little bit more on our own terms is a really exciting, really new, and that can even feel like a bit of a scary thing to do.” – Lisa Lambert

“Everybody fundamentally deserves to be treated with respect and dignity.” – Lisa Lambert

“There are lots of reasons why people can’t take part in those extracurricular social activities outside work. It’s really important to look at the systems, the structures, and the ways that we work together, that if someone can’t join the extracurriculars, it doesn’t preclude them from building connections and building that trust with their colleagues day-to-day in their work.” – Lisa Lambert

“If you feel like you can’t pull back a little bit or maybe share only a little bit about it without going hyper deep, then you might want to exercise just a little bit more care around bringing that up.” – Rick Kitagawa

“It’s designing conversations with thoughtfulness in order to create a specific atmosphere around collaboration, around vulnerability, around authenticity, and around play, even.” – Rick Kitagawa

“It’s really practicing empathy by considering when a leader is going to go first, or go last, or somewhere else and how that changes the social dynamics and the social pressure in the space.” – Lisa Lambert

“That’s really what innovation and collaboration are about. It’s about co-creating new solutions or new ways of doing things that are going to optimize and, at the end of the day, make work better for everyone.” – Rick Kitagawa

“Barriers to innovation are a lack of vulnerability and a lack of psychological safety. It’s a lack of being able to throw in random ideas that might actually be great ideas and might inspire a thought process that leads to a great solution.” – Rick Kitagawa

“It’s fun thinking about being able to explore ideas with reckless abandon. Especially if we’re trying to build completely different systems or discover completely new ways of doing things, then we’ve got to think and have the freedom and the trust to think in different ways as well as explore things that might not work.” – Lisa Lambert

“Play helps create those boundaries for levity, for experimentation, for trying stuff on and breaking things and having things explode in a safe manner where nothing actually is affected because you then have to then make that additional step to anything you create there. You then have to translate it out into the production pipeline or the real world or to client facing solutions.” – Rick Kitagawa

“A lot of times we look at play as being dessert. It’s something reserved for special occasions. It’s something that, if we have time, we’ll put play at the end. It’s often an afterthought. The thing is, play is nourishing. So what if we start with play instead? What if we bring in play from the beginning and we release all these really great hormones and a sense of connection right from the start of the interaction?” – Lisa Lambert

“It’s cool to have Xboxes at work, but that’s not integrating play into work. You can have Xboxes at work, or you can have a pool table, or whatever, but know that’s still putting play on the side. It’s not baking play into your process, your methods, and your patterns of interaction. That distinction is really important. If you really want to get the most out of play and all the good things that it brings for teams, for individuals, and for organizations then that integration piece of looking at those little small moments of play are crucial. How are they woven into organizational culture? How are they woven into how we do things around here?” – Lisa Lambert

“It really transforms the nature of the work itself when you’re integrating play with purpose, with intentionality, and with the spirit of this is why we’re doing it” – Rick Kitagawa

“I think for a lot of leaders, especially in industries that focus a lot on billable hours, there’s a pressure to view time as money and that we don’t have time for games. We have to be serious here. I think with there is a false assumption that if these types of things are baked into interactions, they can waste a lot of time and that they don’t actually speed things up on the backend. You might look at them and say, ‘Oh, there’s a lot of joking around. There’s a lot of play here. Do you get any work done?’ The thing is, you probably get more work done because the innovation, the collaboration, and the communication levels are so much higher in teams that can have fun and can take themselves a little less seriously. Those teams are the ones that usually end up with better results.” – Rick Kitagawa

“Play is not a distraction or something on the side. Play is really integral in bringing out our thinking, bringing out our creativity, our connection, our communication. It’s a practice for that and it’s a really great space to earn trust and build connection.” – Rick Kitagawa